Caring for your child when they are unwell

Read more about this page below

If you are concerned and want to speak to a health professional you can contact your health visitor, practice nurse, GP or Pharmacist. For out of hours advice call 111 and in an emergency call 999.

Developed by Imperial College London NHSTrust this booklet provides advice for parents and carers of children under five years old. You will find information on how to manage common childhood illnesses including coughs, fever and rashes. How to help your unwell child booklet 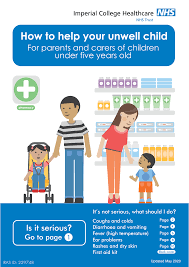 Is my child too ill for school?

Trying to decide if your child should be kept off school, preschool or nursery can be tricky. This NHS resource provides information on common childhood illnesses and how to manage school attendance.

Thinking about your child being hurt or becoming unwell is likely to feel scary but taking the time now to look at this information about what to do in an emergency could help you look after your child if they ever need it. We also recommend you get anyone else who will be caring for your child to look at them too.

These videos are for advice only - watching them does not make you a qualified first aider.

See Growing fast, Caring for your unwell baby for links.

Sepsis, also known as septicaemia or blood poisoning, is life threatening. It can be hard to spot and there are lots of possible symptoms. Anyone with an infection can get sepsis.

Some people are more likely to get an infection that could lead to sepsis, including:

To find out more about Sepsis and how to spot the symptoms go to:
NHS Conditions Sepsis
Sepsis Trust

If you think you or someone you look after has symptoms of sepsis, call 999 or go to A&E. Trust your instincts.